Skip to main content Skip to job search
Coronavirus update: We know coronavirus is causing a lot of uncertainty, so we just want to reassure you that we’re still recruiting. We’re doing our interviews over video, our technical assessments are online and people are still starting new jobs, albeit virtually. Find out more >

Our engineers cover a broad range of areas, including Systems and Software Engineering, Early Stage Prototyping, DevOps, Testing, Infrastructure, Performance, Availability & Security Engineering, and Networks. We’re looking for highly-motivated engineers who like us believe in curiosity, collaboration and a culture of openness and enterprise.

There are 18 vacancies in IT Engineering
Show more

We’re working towards rebalancing our work in favour of engineering excellence over governance process. We want greater efficiency so we’re figuring out how to reduce testing time and production incidents, and how to bring more work in-house. By letting our engineers focus on tech, not management, we’ll get there even faster. 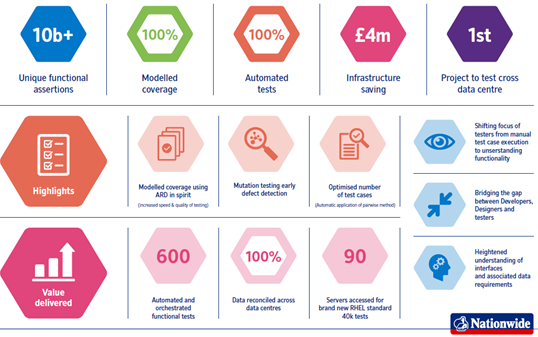 We've recently announced our new Speed Layer which will shape the future of Nationwide, helping us to deliver an IT infrastructure that’s fit to compete in a digital world.

The engineering-led approach to deliver Speed Layer successfully is unique so we caught up with Martin Di Ruzza from the Test Engineering Centre of Excellence to get the details.

“Nationwide is working to adopt a DevOps culture and framework to support delivering change into the production estate more quickly, more often and more reliably than we do so today.

"The traditional testing methods and processes we have in Nationwide lack flexibility. Our response to this in the Test CoE is Continuous Testing. Continuous Testing is designed to provide fast and continuous feedback to the level of business risk carried in that build or release. The aim is ultimately still the validation of both the functional and non-functional characteristics of the solution
under test, which is achieved through unit, system, integration testing and NFT. However, there’s an architectural shift from driving tests at the UI to testing the Application Programming Interface (API) level. The API is considered the most stable interface in a solution and typically subject to the least change, which it lends itself very well to automated testing as scripts are easier to maintain, so can be shifted left into Agile development sprints.

"The key difference with delivering Speed Layer compared to traditional projects is that we adopted an engineering-led approach. Automation typically wins the plaudits, but without a sound foundation of test intelligence, the tests you apply over the top will be brittle and meaningless. A fool with a tool, is still a fool! Led by Simon Snow, my team undertook a significant data archaeology exercise into the world of mainframe, so that we knew individual data attributes, edge cases and transition states from source to presentation layer. Once complete, we created our functional tests which are automated and orchestrated in our pipeline.

"Another shift in mindset is recognising non-functionals as constraints on our stories, not an activity to push to the right of a plan. By componentising NFR’s, we were able to prove our solution’s horizontal scalability in less than five months from the first line of code being written.

"We also had good fun dusting off an old testing technique from 1971 called mutation testing. It’s designed to evaluate the effectiveness of our tests. We implemented this during the Unit testing phase, to improve tests and reduce the volume defects found in system test. A true shift left.”

Look at the stats

They speak volumes. This was the first time that Nationwide has ever tested across different data centres. The Speed Layer team tested everything, no handoffs at all and they could then be 100% confident with the tests.

Grant Valentine, the Delivery Lead for Speed Layer told us “With Speed Layer being a greenfield technology, we had a real chance to redefine how we deliver a heavy lifting project, embrace new ways of working, and introduce engineering-led techniques such as test driven development and automation. It was great to have someone like Martin on the team who was so enthusiastic about taking Nationwide testing to the next level in terms of our test engineering capability. A really impressive and pleasing outcome.”

COO Patrick Eltridge said “The conception of the need for Speed Layer exemplifies our innovative strategy and architecture thinking, and the pursuit of an implementation that delivers resilience, improved member service, and the potential for game-changing analytical insight in the moment shows our ambition and determination to deliver for our members and our other stakeholders. And the way it has been delivered, the engineering-led approach is game changing. Well done to Steve, Grant and the team on this critical first step and I look forward to future developments in this area.”

Massive congratulations to everyone involved and we look forward to seeing what Speed Layer brings next.

Data has never been more crucial in our industry. It’s used to gain better understanding of customers, refine processes, improve user experience, reduce fraud - the list goes on. But as the importance of data grows, so does the importance of security.

At Nationwide, our Proof of Concept team is looking at how organisations and individuals can benefit from the sharing of data while rigorously safeguarding confidentiality and security.

Here’s a quick look at just one of the PoCs the team has worked on in this space, where we have used secure enclaves and functional encryption to implement a decentralised KYC use case. 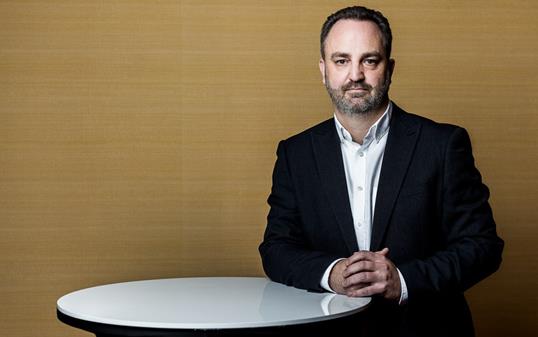 The future of humans and applications

Nationwide’s aim is to provide great service by using technology with a human touch. With this in mind we invited Joe Baguley, VP and CTO of VMware in Europe, to give a Tech Talk on ‘AI, Machine Learning and Chromatography – a view of the future of humans and applications’.

Joe is a recognised leader within the European technical community and is considered one of the most influential leaders in UK IT, appearing in Computer Weekly’s UKTech50, and playing a key role in CloudCamp, communicating how cloud technology fits into the broader IT landscape, as well as advising the European Commission.

Taking a view of the technological landscape today and the key technologies that will shape our future, Joe focussed on Artificial Intelligence and Machine Learning, speaking of how the applications of today are nothing like the past and just a hint of what is to come. These messages came through loud and clear, and reflect Nationwide’s tech agenda:

“Automation is no longer an option but is a design requirement”

With all the developments in technology, the rise of AI and machine learning, what will the effects be within the financial industry? Joe said

The focus on AI is ramping up in Nationwide. Data and Analytics have published our first AI strategy and we are already implementing AI tools to carry out some of the mundane, time consuming tasks, freeing up people to act on the information that is presented back. Using AI is a necessity in allowing us to compete in the future and continue to meet our members’ expectations.

Tech Talks run monthly at Nationwide and are open to all tech colleagues. An external speaker is invited to share their knowledge on critical technological advances, making sure everyone can keep bang up-to-date in fast-moving fields. If you’d like to work with us, using technology to meet our members’ needs now and in the future, take a look at our vacancies or complete the ‘start a conversation’ form and we’ll be in touch.